So with all my ambitious talk of thinking about doing a PhD in my last blog post, a couple of weeks ago I came very close to sacking the whole thing and walking away from even completing my masters.  This came at a time when I felt quite lost with the direction in which I was going with my dissertation, but after a very productive meeting with my dissertation supervisor (phew) I felt pumped up again and ready to carry on. Plus, I had my  presentation and essay ideas approved for my current module (more on that below)  which took a weight off my mind too.

I’m still having some  anxiety issues, but I’ve learned how to tackle things when the panic starts to rise and the main thing which keeps it at bay is sitting down and planning out exactly how much time I’ve got to do things.

So I’ve managed to pretty much plan out the next two months as I have a blog post for the module to do for April 29th and then a 4,000 word essay to do for May 29th.  In between I have to put together a chapter outline for the dissertation with headings and sub-headings and also read through more of the primary sources. I’ve also sorted out my office at home so that everything is where I need it to be and my OCD really comes into play here by keeping everything neat and tidy after I’ve finished work for each day.  I can’t work in mess.

I’m really enjoying the module which I’m currently taking, although after the Easter break there’s only 2 more seminars to take which means that I’m almost at the end of the masters!!!  I can’t believe I’ve been doing this for the past 18 months and only (only??) another 6 months and I’ll be done. This module is a real departure from what I’m used to – that being 18th century anatomists – and I’ve dragged myself into the 20th century for the time being but it’s a really nice way to end the formal modules I need to take, I think.  It’s called Death, Dying and The Dead and as you can see from the title (!) it’s about death, dying and remembrance of the dead in the 20th century and it’s been one of my favourite modules.

We had to do a presentation on a subject of our own choice which relates in some way to one of the seminar topics.  I chose to write about a small leather trunk which was donated to a museum, which was full of the belongings of a young girl called Violet who died aged 10 after having mastoid surgery in 1919.  But mainly it’s about a photograph which was found in the trunk, which is of Violet lying in her coffin after her death and what that tells us about post mortem photography in the early 20th century.  It may not sound it, but it’s fascinating stuff (yes really!). 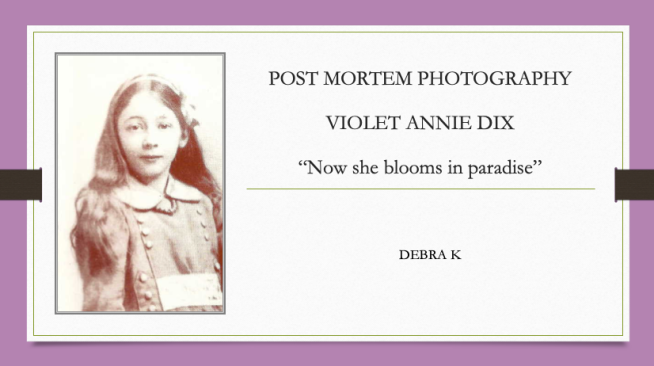 The presentation went well for me and I got a mark which I was overjoyed with, my best mark on my masters so far (by 1 percent!) and I actually enjoyed doing it.

That’s the presentation out of the way and now the next part is to write a blog post based on the presentation I gave which (if it’s any good) will hopefully end up on the Living With Dying website which is led by the tutor for this module.

So that’s what I’m currently about to start work on.  I thought I’d update this blog with a post seeing as I haven’t posted on here for a while – I’ve been very remiss and very busy with uni work but I need to update this now and then if I’m going to keep a good record of my exploits.

After the blog post I have the small matter of a 4,000 word essay to write – I’ve chosen to write this about the collective grief which was experienced by the country after the death of Diana back in 1997.  I remember that day very very well so I’m hoping that it’ll be interesting to write – and hopefully interesting to read (fingers crossed).  I will report back again when I’ve completed both the blog post and the essay and when I can lift my head up and breathe again……for a short time.

Join 290 other followers
Follow Deb's Adventures in Academia on WordPress.com