This is another post which has nothing to do with the Masters, but a lot to do with my classical studies roots. A couple of weeks ago Mike and I came back from a very welcome break on the Greek islands of Ios and Santorini. Now I’d never heard of the island of Ios (pronounced Eeos) but it turned out to be an island to the north of Santorini, which we love.  So we decided to spend a couple of weeks on both Ios and Santorini to recover from the mental stresses of the past few months.

Once we arrived on Ios we read through the hotel’s helpful ‘1001 things to do on Ios’ blurb and came across a section which mentioned it was thought that Ios was the location of Homer’s burial place. Now Homer has been a love of mine for many many years and of course with my recent hard earned degree being in Classical Studies I felt it was my duty, nay honour, to pay my respects and visit his tomb.

We were very lucky as there were only a couple of other people who were also visiting, and as there are hardly any tourists on Ios we were the only ones there for quite a while.  It was very peaceful and beautiful and quiet. 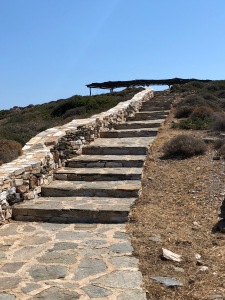 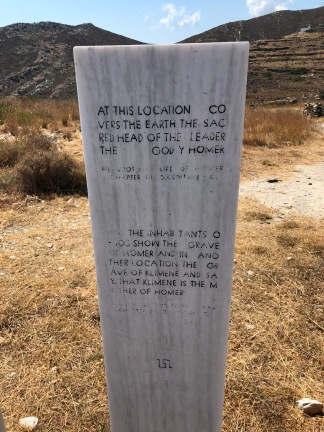 …and up onto the top. 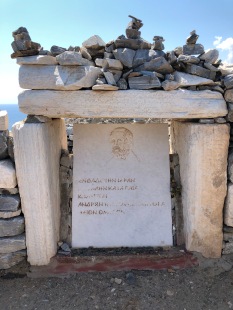 Resisting the urge to grovel at the tomb and uncontrollably sob my thanks for helping me receive a First, I was composed and dignified and said a silent thank you to him.

Of course, that’s if his bones lie there at all.  But no matter, it was the thought that counts and visiting both the tomb and Greece again made me miss my classical roots a little, no actually a lot.  For a short while I thought of doing the MA in Classical Studies with the Open Uni when I’ve finished my current MA (yes, I am a glutton for punishment) but I’ve put that thought on the back burner at least for now.

I read Madeleine Miller’s new novel Circe while I was in Greece, quickly followed by The Song of Achilles, which to my shame I hadn’t read yet.  I can highly recommend both of these and with them being based on Greek mythology reading them in Ios and Santorini gave them an extra dimension and depth which was lovely.  And it made a welcome change from 18th century anatomy! 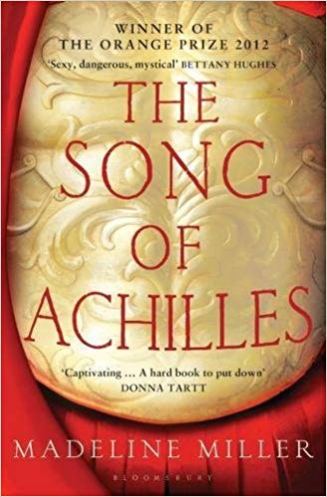 So Homer, I don’t know if you’re buried there or not, but I’m glad I was given the chance to pay homage anyway.  And thank you!

2 thoughts on “Paying homage to Homer”