So after leaving school in what feels like the Dark Ages (yes, it was that long ago), without any A levels and just a smattering of O levels, on Friday 4th November 2016 I graduated from the Open University, with a First Class Honours degree in Classical Studies. Yay!! 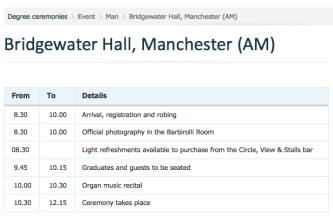 The degree ceremony was held at Manchester’s Bridgewater Hall in the morning and in a word it was…..FANTASTIC, the best part being that my family were there to celebrate it with me and there was such a great vibe going on that made me so proud of what I’d achieved.

I really didn’t expect it to be so emotional, although I had been told by previous graduates that it was and therefore I made sure I wore waterproof mascara just in case (you can never be too careful, panda eyes whilst wearing a mortar board and smiling is not a good look).  It was so great to be there with everyone and all the other OU graduates of different ages and experiences. One of the nicest parts was that my tutor from my last module, A340, was handing the scrolls over to be presented to us and it was lovely to see her there doing that. 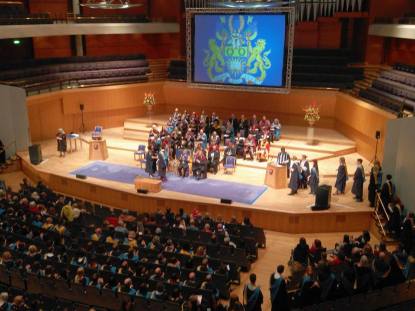 Even though we weren’t able to wear one for the presentation itself, I’d decided to invest in a mortar board for the ceremony, as I wanted it to be a keepsake for afterwards.  But not everyone had thought like me as it turned out that only about 5 other people out of the hundreds there had the same idea.  It kind of felt like we had a secret club going on, although not so secret as we stood out like sore thumbs 🙂

So it wasn’t going to be like this afterwards: 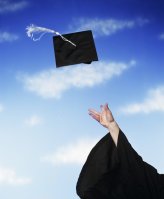 But no matter, I didn’t really care as I’d graduated and I was going to bloody well enjoy every second of it!  I even wore it afterwards when we went to Cloud 23 at the Hilton Hotel for a slap up champagne afternoon tea to celebrate and I made mum, Lissa and Lauren wear it too… 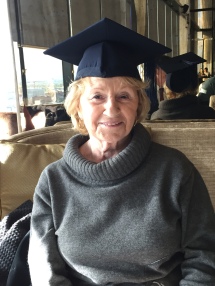 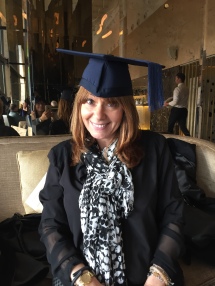 Looking back I wonder how Mike somehow managed to escape this mortar board photo op……??  Here we are enjoying the champagne and the gorgeous food.

Was even nicer than it looks

A little aside here, thank you to my sister Lissa who braved the heights of Cloud 23, which looks over the skyline of Manchester, even though she is afraid of heights, Lissa it was much appreciated!! 😘😘

So we ate drank and were very merry, especially as the rain had managed to stay away which is no mean feat when you live in Manchester, in the depths of November.

And here’s my keepsake in all its glory, in pride of place in my office.  I was going to buy one of those mannequin heads to proudly display it on, but decided I’d keep looking at it waiting for it to move and scare me to death, so I bought a hat stand instead. Much less scary 😊