After the challenging experience of A330 I came back fighting, determined to crank myself up a gear and give A340 my best shot.  That’s not to say that A340 didn’t have its own fair share of challenges either, including the minor issue of a 3 hour exam at the end and a not so little case of toothache, but overall it really was a great way to end my degree with the OU and one of my favourite modules.  And thank god something (finally) clicked inside me – this was the module in which it all came together and I got my best ever result – distinction and overall a first class honours degree! 🙂

It was the first presentation of A340 so in a lot of ways it was a step into the unknown as there were no past exam papers and no students who had prior experience of it.  I wasn’t quite sure if this was a good or a bad thing, but as I wasn’t meeting the Romans for the first time, I wasn’t going in completely blind.

It started officially on 3rd October 2015 but before that, on 1st October, Mike and I took a little trip to Rome, obviously in pursuit of really meeting the Romans, albeit modern day Prada (not toga) wearing ones.

We went for 5 days, and it was fantastic, especially the Roman Forum, which I’d been reading about and seeing images of for as long as I could remember. 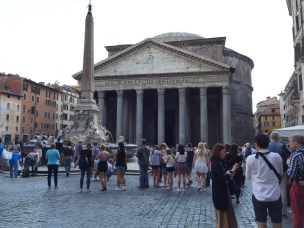 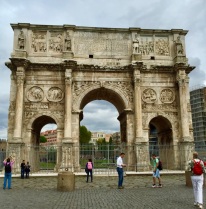 It was a fab few days, we did so much sightseeing (and eating) and it really helped me when the time came to read about the different places covered in the module.

So after returning to Blighty, with the crew of the Enterprise and my trusty advisors Sheldon and Missy looking over my shoulder, I knuckled down to the final push. It was weird to be doing the final module after all those years of studying.  I had no expectations from the module other than I wanted to get a 2:1 and after struggling with motivation with A330 I was quite motivated to get the whole thing finished and then quit studying.  Hmm, famous last words.

The major difference between my first course and my last (apart from the obvious level of study) was that there were now only 3 books which arrived instead of the gorgeous package of sweet smelling new study books, including CDs and DVDs, which arrived for the first module all those years ago.  It’s all online nowadays, which isn’t a problem for me, as I’m very comfy with IT but for those that aren’t….well apart from the huge hike in costs, it’s a deal breaker for a lot of them I think (judging from the forums).

But at the risk of sounding old (perish the thought) there’s something about the look and feel of crisp books that just can’t be beaten and my poor printer worked overtime printing out the reams and reams of paper with the textual sources PDFs, so I wouldn’t have to read it all on screen.

Something else that was different on this module was that there was no official OU forum!!  And for that I was mightily grateful, but I know that quite a lot of people weren’t.  I’ve never liked the OU forums, I’ve discussed that previously in my post for A200 but it did have a fabulous Facebook forum, which I found really helpful.

But back to the module. There were 6 blocks in this module, with five TMAs and one 3 hour exam at the end.

This block focused on ways in which the Roman empire can be studied, the construction of different historical narratives, the geography of the Roman world and life on the northern frontier of the Roman empire, namely Hadrian’s Wall and Vindolanda.  I loved this block, especially the videos and I found the sections on archaeological plans, watchtowers and forts really interesting which was just as well as they cropped up in the exam!

2)  The heart of empire: the city of Rome

Ah now we moved onto Rome and the emperors.  Lovely stuff.  This block explored aspects of Roman history, the available evidence, the change from Republic to Empire and some of the characters who helped to shape it.  The emperors discussed here were Augustus, Domitian and Hadrian.  Augustus I already knew about but learning about Domitian and Hadrian was interesting, plus Unit 2 focused on the Roman Forum which of course I’d just visited so it really brought it to ‘life’ as it were.

No.  This one wasn’t for me and apart from Unit 1, which dealt with the Roman army, it felt a bit like wading through treacle.  And this block’s TMA was the only TMA in the whole of my time with the OU which reduced me to tears.  Tears of frustration, exasperation and I think general cantbebothereditis.  But I was determined to get through it and as I had a level to maintain I gave it my all yet again and was very happy to move onto the next block.

And onto Pompeii!!  Which literally happened a year later, when Laura and I visited it in April 2017, together with Herculaneum.  We also had an eventful trip up Mount Vesuvius during which I

felt every one of my 54 years.  But that’s for possibly another blog post.  Here we are both smiling once we’d reached the summit of Vesuvius – me smiling because I’d made it up to the top (good god I realised I was SO unfit) and Laura smiling because she realised she wouldn’t have to carry me back down after all.

Anyway, back to the block and unfortunately there wasn’t too much on Pompeii, but it did deal with Roman urban cultural life so I was able to meet up with Pliny again, amongst others, who I’d loved studying in A219.  It also covered Roman religions throughout the empire and had an interesting look at one of the most definitive representations of Ancient Rome, the Roman toga.  Apart from the Unit on the Romanisation debate (too heavy to go into here) I enjoyed this block.

This block had three parts to it.  Firstly, we moved onto the 3rd century complete with its ‘crisis’ (a bit hard going); secondly the Emperor Constantine (so-so) and lastly, the legacy of the Roman empire in 19th century Britain (brilliant).  For me, I loved learning about the way 19th century empires (Britain and the US for example) modelled themselves on Rome. And again for me, this came up in the exam.  Yay 🙂

This was brilliant and such a great helper when it came to revising for the exam. Usually these kind of revision aids are more helpful in promoting panic and sheer terror with the realisation that you’ve remembered absolutely nothing from the previous nine months, but this one was fantastic and really helped at revision time, so thanks OU for this.  You get a big thumbs up from me 👍

And so the time dawned for the revision.  I got all my bits and pieces together, set out a timetable for revision and got stuck in.  As much as I hated doing the EMA for the last module, A330 (you can read that here should you so wish), that’s how much I loved doing the exam revision.  Must need my head testing, but I really enjoyed it. As on previous modules with an exam (apart from the horrendous A200 but we won’t talk about that again) it brought the whole module together for me and things became clearer.

Slowly losing the will to live 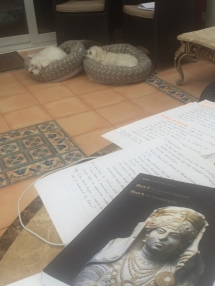 And then of course there was the day right slap bang in the middle of revision when I finally admitted that I had proper toothache.   You know the feeling….you pretend it isn’t happening, that you’re going to wake up in the morning and all will miraculously be ok, no toothache here thank you very much.  Only that wasn’t the case.  It was there, oh yes, 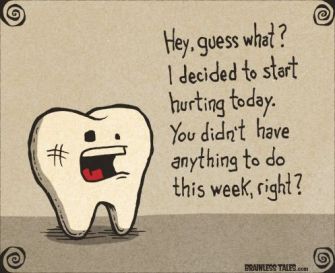 and it kept popping up to say hello I’m still here, just when I thought it had gone.  And this little beauty wasn’t just a simple case of a filling, oh no, I later found out that this required full blown root canal treatment. I rang the dentist and made an appointment for after the exam, I really didn’t have time to sort it beforehand and I just kept praying that it didn’t get worse, which very very luckily it didn’t and I was able to get it sorted the week after.

This module was great for another reason as well, my fantastic tutor AC.  I’d had lots of tutors along my OU journey, but AC was most definitely my favourite.  Not only did she return the TMAs very very quickly (a previous unknown after some tutors I’ve had) but her passion, energy and enthusiasm were second to none and I think it most definitely rubbed off on me.  Thank you so much AC, I’m eternally grateful to you 🙂

So the day of the exam dawned, Friday 3rd June 2016.  This time it wasn’t in the Great Hall at the University of Manchester, but at the Renaissance Hotel on Deansgate.  I took this as a good omen for lots of reasons too detailed to go into here and with me doing lots of deep sighing (my response to nerves) and cramming from my index card revision aids along the way, I was dropped off by Mike to do the deed.  And do it I did.  3 hours later I emerged thankful that the questions weren’t too bad, that I’d written for the whole 3 hours and that the toothache hadn’t reared its ugly head too badly.   This was me strutting out of the exam……

All I needed to do now was wait. And wait I did, but in the meantime Mike and I also did some celebrating of the end of my studying and my degree, me thankful for no more studying and Mike thankful for no more TMA stress, anxiety and general bad temper which he’d had to put up with for a looooong time.  So this is us with just a few of the glasses of champagne that we had over the next few days to celebrate the achievement for both of us….

The day after the exam…

The day of the exam…

And so Result Day dawned.  I was at work when I got an email saying that the results had come through but somehow I made myself wait until I got home (not too long only about an hour) before I had a look and there it was……I bloody well did it.  Distinction!! 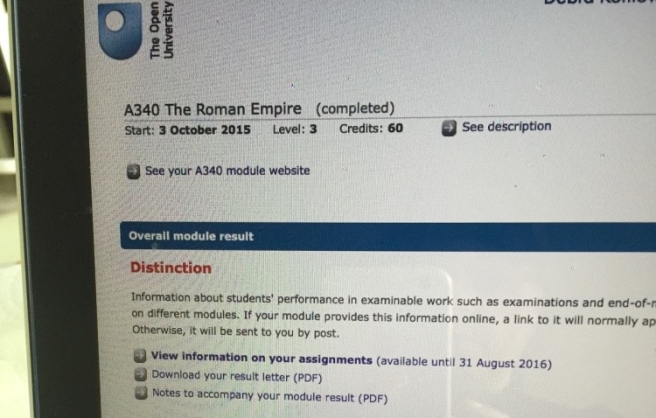 I was over the moon!  The hard work had well and truly paid off and after furiously checking the degree classification calculator over and over and over again, I realised that after 8 years, 7 modules, 4 exams, 36 TMAs and 1 EMA it meant I’d got a FIRST CLASS HONOURS DEGREE!!

There then followed much celebrating and of course the graduation ceremony itself, which I’m going to cover in my next blog post.  But till then, here’s what I worked so hard for in black and white 🙂

Join 290 other followers
Follow Deb's Adventures in Academia on WordPress.com