This was one of my favourites, not only because of the subject matter, but also because of the friendships I made along the way and it was the first of the three Classics modules I took.

It started in October 2011 and finished in June 2012 and was the first module I studied over Christmas, rather than summer.  This I wasn’t happy about.  I loved finishing the modules around October time, which meant I could then happily obsess and stress myself out about Christmas presents etc etc without having to worry about studying and TMAs, but now this just added an extra dimension of pressure to the whole thing.  The OU gave us two weeks off over Xmas and New Year, but as I didn’t follow the official calendar anyway, I used to find myself studying over the holiday period nevertheless.  But ho hum these things are meant to try us, so I just got on with it like everyone else.

But back to the module.

I was in heaven.  I’d read about the Greeks and Romans since I was young so this felt like coming home and I was just so happy that I’d found myself in such a lucky position as to be able to study it academically.  My love affair with Greek, Roman, Norse and Egyptian mythology had started years and years ago when I began reading Roger Lancelyn Green’s fab book “Tales of the Greek Heroes” and it pretty much went from there.

And again, but back to the module 😉

The module was split into 5 blocks and in a nutshell, the blocks were:

This block focused on the earliest periods of Classical History, the time of the Greek epic poets, especially Homer but with a bit of Hesiod thrown in for good measure.  Parts of the Iliad and the Odyssey were studied, together with a section on Greek pots and

cemeteries which I found weirdly fascinating.

The aims of this block were to make the student familiar with the main events and developments in the earliest period of Greek civilisation and to enable the student to appreciate and critically analyse the artistic qualities of the Homeric poems, whilst exploring the social structure and moral values of Homeric society.  I loved all this block and having read both the Iliad and the Odyssey beforehand definitely helped yet watching the dodgy film starring Armand Assante (not offered by the OU I stumbled across it by accident!) probably didn’t, although somehow it managed to get 59% on Rotten Tomatoes so someone somewhere must have liked it.

This block looked at Athens in the fifth century BCE and sources from theatre, comedy, art, architecture and history were used:

I really enjoyed all of this block, I found Persians fascinating, learning about the Acropolis made me want to visit Athens and even the Epitaphios Log

os was really interesting.  However when it came to Lysistrata, it wasn’t so much the play itself but the audio CD of Lysistrata which the OU provided us with which sounded to me like a group of dirty older men pursuing younger women (not so much Carry On Cleo unfortunately, more Benny Hill), so much so that I couldn’t bring myself to revise it again for the exam and I decided to leave it out of my revision rather than put myself through the excruciating experience again.

This block linked the Greek world with the study of cultural developments in Italy, starting with the Greek colonisation of southern Italy and then moved onto politics and power in the Roman republic.

This block was all about the social history of Rome: the population, how it was organised socially and what daily and family life in Rome was like  – brilliant!   It also introduced me to Pliny, Martial and the fab fictional character of Trimalchio.  So this block had everything – gladiators, slaves, the Roman baths and it even introduced me to the wonderful Mary Beard in the shape of one of her books, which the OU used for A219: “Rome in the Late Republic”.

As an aside, this is me taking a selfie with the unsuspecting Mary in the background, when I went with Laura and Brenda to the British Museum back in June 2014 for her talk about her latest book “Laughter in Ancient Rome”. She doesn’t look much like she’s laughing, but I certainly was! 🙂 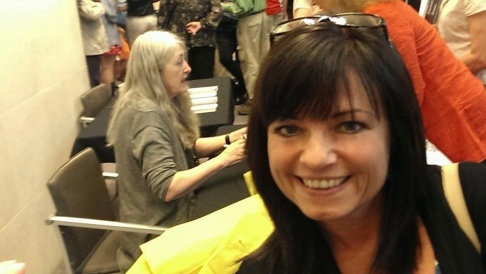 The 5th block was mainly concerned with revision and (as the OU endearing names the block) retrospection. However I would like to rename this block as the Revision and Panic block in case you:

a)  didn’t write enough notes through the module or

Because it was at this point that the panic used to really set in.  Although I gave myself enough time to revise, it was still a wake up call that the exam and the end of the module was near.  To be fair, this block was really helpful when the time came for revision.

Onto the tutorials.  These, I loved, but I know these particular tutorials weren’t everybody’s cup of tea (to say the least) and they were held this time at the same location where I’d been for A218 tutorials, at the MMU.  Laura, whom I’d met at Urchfont while I was studying the challenging (for me) A200 module (my thoughts on that lovely module can be found here) was also taking A219 so we’d usually arrange to meet up after the tutorial and have a coffee or lunch.  On these tutorials we met Beverley and Brenda, who we’d come to know from the A219 Facebook forum and we arranged to meet up with them too after the tutorials and the four of us have kept in touch since those days, with many outings and much fun and laughter involved.  This is us, the four amigos, on a trip to see Helen McCrory in “Medea” back in August 2014 and a few other pics from over the following years, fortunately there aren’t any of us stuffing our faces, which our meet ups usually involve…..

So onto the revision.

Again I blocked out 4 weeks for revision and based on my newly found confidence after the A218 exam, I set out with the same approach towards it as I’d done on that module.  I’d even arranged to do the revision weekend again at Urchfont as it helped me so much on A200, but I had to cancel it at the 11th hour as Mike suddenly became poorly and I wasn’t able to go.

Another little aside – never ever Google medical symptoms in the middle of the night.  Ever.  I did and I spent a very sleepless night which reminded me of the days when the girls were very tiny when I used to pinch them gently to check they were still breathing, as I’m sure every parent has at one time or another.

But pinching a grown man in his 40s?  I didn’t pinch him (although it would have been interesting to see what would have happened if I had haha) but I did lie awake in bed listening for his breathing.  A course of antibiotics later and he was absolutely fine and fully recovered and happily back testing me on all things Greek and Roman for the exam.  I think he’d admit it himself that he learned a lot about the ancient world in doing so, although whether he enjoyed it or not is debatable 🙂

And so the day of the exam dawned, 12th June 2012.  Laura, Bev and I went through the 3 hour ordeal yet again in the University of Manchester’s Great Hall (this was my third exam there in nearly as many years).  Afterwards we met up with Brenda (who’d taken the exam nearer to where she lived) for a slap up Pizza Express post exam celebration, to pick over the bones of the exam, which is of course the worst thing you can do after an exam.

So cue much oioi oioi oioiing (Greek lamenting) between us and general re-enactment of the ritual lament from the Chorus in Persians (similar to main image above, which is credited to photographer Sam de Mol, production Mount Olympus) and apart from the thoughts of “oh bugger I didn’t write that, why didn’t I bloody write that” running through my head over my Four Seasons pizza, I must have done ok as on 31st July the result dropped onto my OU Student Home page and I was very very happy to find I’d passed the module with a Grade 2 pass.

Another aside – I love this meme, I’ve already used it in this blog somewhere else and I’m sure I’ll use it again, but apparently the boy who’s in the picture is called Sam Griner and is now 10 😳

So the module for A219 ended very happily and I decided to up the stakes, immerse myself even deeper into the ancient world and enrol on my first Level 3 module, A330: Myth in the Greek and Roman worlds, which was due to start in October 2012.  Onwards and ever upwards!!

(If you’d like to enrol on this module then you’d better be quick as the last presentation starts in October 2017, click here to be taken to the Open University’s A219 page)

2 thoughts on “A219 – Experiencing the Classical World”